How well are you controlling NO₂ in your Road Tunnel?

The need to minimise NO₂ exposure in road tunnels has been inhibited by the lack of suitable, low-maintenance sensors for measuring ppb levels of NO₂ . Recent improvements in technology have resulted in the introduction of not one but two competing techniques designed specifically for this application, making the possible control of tunnel NO₂ levels a reality rather than just a desire.

Data from CETU illustrates the importance of NO₂ for ventilation control. Traditional control parameters CO & visibility are significantly below control threshold levels; NO₂ is persistently above the control threshold. The data also shows how the NO₂/NO ratios vary from 1:20 to 1:3. Inferring NO₂ levels from a measurement of NO is not reliable. A direct measurement of NO₂ is essential for control.

CETU compared the output from the CODEL TunnelTech 205 NO₂ against a chemiluminescence NO/NO₂ analyser in month-long trials. The accompanying chart shows typical 5-days operational periods for each sensor and demonstrates the good agreement of our system against the standard analyser (Chemiluminescence principle is the reference method for NO/NO₂ measurement). 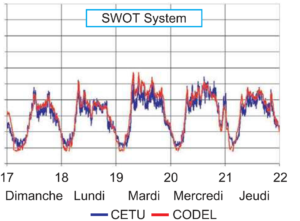 For further information on any of our products, please complete our enquiry form and a member of staff will respond as soon as possible.

Please click below to receive a quote for any of our products or services.